When I was about six years old, my aunt gave me and my sister her entire Barbie collection (which was a lot). Over the years, they have gotten worn and needed some touch-ups. I researched how to touch up the paint, what kind of paint to use, etc. Then I went to work.
I had a lot of fun giving my vintage Barbies makeovers and making them look like new. My daughters brought me their Barbies, too, to touch up or change the color of the lipstick.

After years of play:
Lipstick was painted on with fingernail polish, which bled into her face. I used rubbing alcohol to get the polish off and Oxy 10 to get the bleeding out. Her hair needed a trim, but it’s been in a pony tail for so long, it’s going to take some work taming it.

She’s loving getting a makeover in the Salon chair I made her . . .

I repainted her lips. And here she is all finished:

And here’s what he looked like after 46 years:
He’s going bald! His eyebrow has rubbed off a little, too.

I repainted his hair and eyebrows. And here he is all finished:

I repainted his hair. And here he is all finished:


“Early in 1965, Wigs Wardrobe Midge™ was sold, and consisted of a Midge™ head with short molded hair and three wigs. This was the Midge™ counterpart of the Fashion Queen Barbie™. Since she came with only a head, another doll had to provide for the body.” 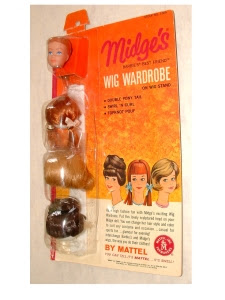 )
She is balding and her lips are faded.

I repainted her hair and lips. And here she is all finished:

Francie wasn’t my aunt’s. When I found her at the thrift store, she had Midge’s body and no hair extensions. She still has her pink blushing, but her eyebrows and lipstick have worn off a little.

After her makeover:
I repainted her eyebrows and lipstick. 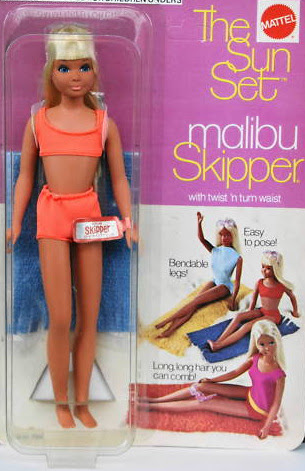 Here is a Malibu Skipper head that I won off of ebay. When I received her, I noticed her eye and lip paint were rubbed off in some places. The auction said that her face paint was good. It was hard to tell in the photo. Also, her hair was in two braids and she was really bald in the middle where the braids were parted.
Ebay photo:

I took out the braids, washed her hair, straightened her hair with the curling iron, put gel in it to keep it from going all directions, repainted her eyes and lips, and touched up her eyebrows.
After photo:

I remember so clearly, as though it was yesterday, when it was my 6th birthday and my mom took me to the store to pick out a present. I picked Horse Lovin’ Skipper. She was my first Skipper doll. Later down the road I got a modern Skipper, but I liked Horse Lovin’ Skipper best because she reminded me of me.
I had her entire outfit, complete, until my kids got to her. I had braided her hair in many braids to keep it from knotting up. But when I took the braids out, her hair was really wavy and I wanted her to look more modern. Her lips and whites of her teeth were faded completely off. In the photo below, I repainted her lips and teeth. I also had to use a hot glue gun for her neck because it was so broken that the head would not stay on.

I straightened her hair with a curling iron. I would not have dreamt of doing that because of fear of ruining her hair, but when read online that I could safely use a curling iron on Barbie hair, I went ahead and did it. I also used gel to keep the curl.

I put a thread spool net on it to keep it down since it had been in braids for so long, it liked to stick up.

My next blog will be with her new clothes!