For about the past 7 months, my mom has been living with my aunt.  My sister is telling me a lot of things, which I am not sure which are true and which aren't.  I was told that she quit her job to take care of my mom full-time. The plan was to take care of mom for just a few months and then go back to work, but she has found that taking care of mom is more tedious than expected. Plus, the care that she is getting now is so much better than when she was with my dad, that she can't see her going back.

I've seen my mom about every week. It's different going to see her at my aunt's house. It's not "home". My mom is on a catheter now, so my aunt doesn't have to take her to the bathroom except when she needs to poo. My mom's physical therapist is no longer coming over because after 6 months if there's no improvement, they quit. Then she's supposed to go on hospice, but she refuses.  Every week my mom loses an ability that she had previously. She can now only stand for a few minutes before her legs become too shaky. She cannot lift her hands or arms at all. It is getting extremely difficult to understand her. I am usually the only one that can understand her because I'm used to my 4-year-old son talking, and he talks like a 2-year-old. She's getting skinnier and looking older. Her skin hangs off of her arms because there's no muscle there anymore. Everyone expects her to die any day now. It makes me so mad when they say stuff like that. They need to be positive and trust God. **Oh ya, I've been listening to Joyce Meyer and reading her books, which SAVED me. She taught me how important it is to trust God, and that the enemy (Satan) will try everything to put doubt in your mind that God even exists.**

My sister moved back home, so she has been helping out, but at the same time, she has been nagging me to tears. She tries to put guilt trips on me, saying I need to come over more. I come when I can, and so far, I've seen her every week. I asked my mom how often she'd like me to see her and she said each week. I told her I've been seeing her each week and she looked surprised. I think she gets so bored all day that a week seems longer.  And I think someone has been telling her lies about me, or at least non-stop negative things about me.

She has not been getting massages like she should, so the acupressure therapy that's supposed to heal her is non-existent to her. She spent more money getting tests to see if she has something else like Mercury poisoning instead of ALS. I have read though, a theory that states that mercury poisoning is what causes ALS.

I had a dream a couple weeks ago that my mom was healed through spiritual warfare. After waking up from that dream, I really felt that this "ALS" that she has is actually a spirit that she needs delivered from, and that's why there is no physical or medical cure for ALS. I've been telling everyone this, and saying we need to get together and get someone who specializes in this to come over and deliver her from it. But nobody is doing anything.

Here's an updated picture of her. She just doesn't look like herself anymore. She's holding my baby niece. 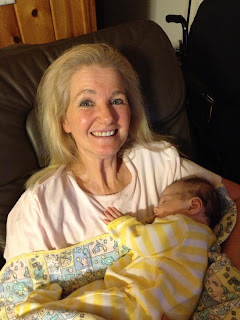