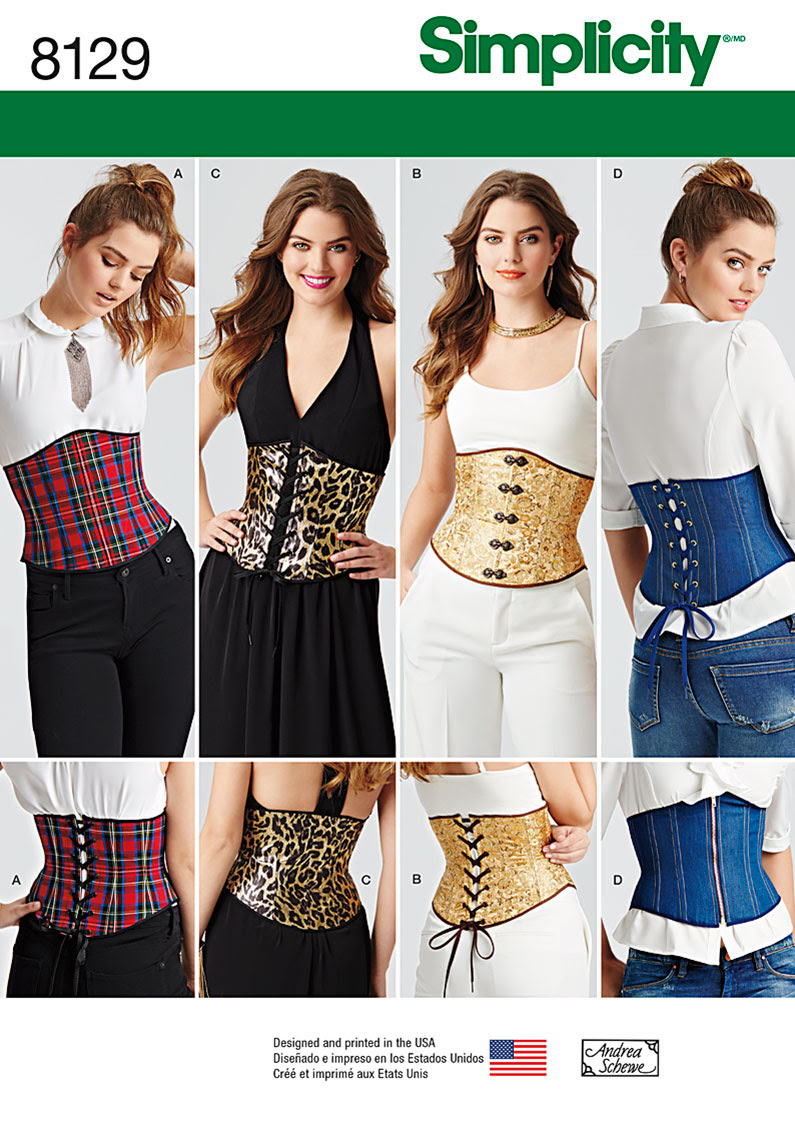 Pattern Description: Misses Easy Waist Cincher Corsets
Pattern Sizing: 6-14. I used size 12 and 10.
Did it look like the photo/drawing on the pattern envelope once you were done sewing with it?  Pretty Much. There were some slight differences since I did it a little differently.
Were the instructions easy to follow? Yes. The hardest part was making sure I matched the right pieces together.  It is definitely recommended to mark each piece of fabric with not only the marks on the pattern but also the numbers and which direction (up or down) they go.

What did you particularly like or dislike about the pattern?  The view that I chose to do was D, with the zipper in front and ties in back. The zipper was very difficult to work with. I did not like working with the zipper. What I DO like about the pattern is how many different ways that a corset can be made. The sky's the limit. Also, I like how easy it was. I could put one together in one morning.
Fabric Used:  For the first one, I used 11 oz. dark denim (100% cotton). The second one, I used Fashion Bottomweight--Flock Black Denim (70% Cotton, 28% Poleyster, 2% Spandex). The third one, I used Sew Classics Suiting Dapple Fabric--Potting Soil (100% poly filament). I prewashed all of them and purchased all from Joann Fabrics.
Pattern alterations or any design changes you made:
The directions called for bias tape around the top and bottom. The first corset I did (the denim one), I used the bias tape, but I didn't like it. For one, the bias tape should have been wider. It barely fit around the bulk of the two fabrics (outside and lining). Also, I didn't like stitching the front and lining together in individual pieces, as the directions called for. For one, it made the seams show really bad on the inside.  I used pinking sheers for the seams, but I didn’t get them close enough, so when I wear the corset, it gets tiny threads all over my shirt. Also, it wasn't as "neat" as I like.  It does make it easier to place the boning in the correct place, however, and if I trim the seams more, then it wouldn’t matter for the “neatness” factor.
For the second and third corsets that I did, I sewed a complete set of the front and a complete set of the lining, then stitched the zipper on, then stitched the front and lining together at the top and bottom, (right sides together) and flipped it right side out (See photos).  I edgestitched the top and bottom.  I really like how it turned out, and it fit better since I have a short torso.
Again, the zipper was very difficult because it calls for a 10-inch separating zipper while the corset is barely more than 10 inches. I then stitched-in-the-ditch in the front with long stitches in each seam where the boning would go so that I could flip it over to the inside (where the lining is) and stitch the boning on, with the stitches as my guide. I wouldn't have to do this if I stitched the lining pieces individually with each front piece as the directions called for.
Lastly, I stitched #7 on the front end (and left off the lining piece). #7 gets folded over, so it actually becomes double the fabric, so if it is the front and the lining, it is 4 layers thick, making it very difficult to punch holes for the eyelets.
For the first corset, I used size 12, accoring to my waist measurements. It seemed slightly too big, so the next one (the black one) I used size 10. It was a little snug and I had to pull the ties out quite a bit (which is why I LOVE corsets, so that you have this option.) The third one that I did (the brown one), I used size 10 but I stitched 1/2 inch seams rather than 5/8 inch. It was still a little snug. I think I will stick with the size 12 next time.
I sewed fashion buckles on the front of the brown one, for looks.  It was very difficult.  I used invisible thread on top, and black thread on bottom. I used #9 needles because I didn’t want big holes in the leather.  I broke two needles because the thin needles couldn’t take the pressure of the leather.  I then used a titanium #12 needle and it did not break; however, I self-turned the wheel to move the needle rather than using the pedal for most of it. I also used a zipper foot.
Would you sew it again?
Yes, but with some alterations. I need to figure out how to better insert the zipper (if I use view D again). The zippers that I used were "light" zippers. Next time I will get "heavy-duty" zippers. Also, I would like to use bias tape, but will need to make alterations to the height first.
Would you recommend it to others? Yes! They are so fun to make!
Conclusion: Overall, I had a lot of fun making these.  My favorite is the brown one.  I think because it looks a little “steam-punked” and the fabric I used looks like suede (which is the look I was going for).  I wanted a variety but also wanted the corsets to easily go with several different tops that I have.  I have photos of the corsets with a white shirt, and also a blue/black shirt, both on me and on a mannequin.